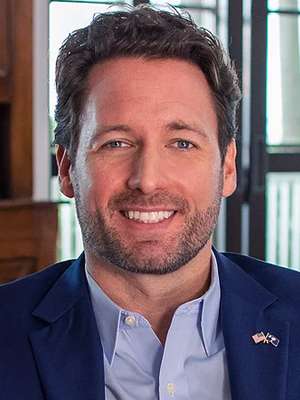 Former United States Congressman Joe Cunningham was born and raised in a small, rural town in western Kentucky before moving to South Carolina to attend the College of Charleston over twenty years ago. ​

His father, Bill, is a Vietnam Veteran and former Kentucky Supreme Court Justice. His mother, Paula, helped raise five rowdy boys while starting and operating her own publishing company from their kitchen table. ​

A product of public school, Joe attended the College of Charleston before graduating from Florida Atlantic University with a Bachelors of Science in Ocean Engineering. After graduation, he worked for a marine and environmental consulting firm in Naples, Florida for five years before being laid off during the 2008 recession. He later graduated from Northern Kentucky University’s Salmon P. Chase College of Law, where he also served as the national Vice-Chair of the Student Bar Association. ​

After passing the bar exam, Joe moved back to Charleston where he began practicing construction law at a downtown firm. ​

In 2018, he became the first Democrat to be elected to South Carolina’s First Congressional District in over 40 years. The Charleston Post and Courier called his victory the “biggest upset in modern South Carolina history.”​

During his two-year term in office, Congressman Cunningham was widely recognized for his accomplishments. While serving on the House Veterans Affairs and Natural Resources Committees, he passed two bills into law in his first term, including the Veterans Tele-hearing Modernization Act and the Great American Outdoors Act. In 2019, Joe delivered on another signature campaign promise when the House passed his bipartisan bill banning offshore drilling. ​

Among his proudest legislative achievements in Congress are the passage of his bill to close the Charleston gun loophole, the “For The People Act,” which gets dark money out of politics and ends gerrymandering, and the George Floyd Justice in Policing Act.​

Despite significant crossover support, Cunningham was narrowly defeated in 2020 by just one point in a district that President Trump carried by six. In his farewell address to Congress, he decried the hyperpartisanship and extremism in modern politics in a speech that has been viewed over 1 million times online.

​Since leaving Congress, Cunningham has returned to practicing law in Charleston and spending time with his son, Boone. ​

I’m the father of a three-year-old son who is about to be a South Carolina public school student. And if you ask me if I’m satisfied with the current state of public education in this state, the answer is no.

We have a teacher shortage here in South Carolina and it’s because we don’t pay our teachers enough. That leads to teachers leaving the profession, class sizes getting bigger, and students falling behind.

​It’s time to pay our teachers the national average and provide strong incentives for new teachers to teach in our poorest school districts. We should also make good on a promise that was made a long time ago when we passed the lottery to make in-state public college tuition-free for students who make a B average or better.

My first act as governor will be to expand Medicaid for 180,000 working people in this state. For the governor to deny the federal government’s offer to pay for 95% of Medicaid Expansion—just to make a political statement—is not only shameful and cruel, it’s also bad business.

​Expanding Medicaid would create 40,000 new jobs, prevent hospitals from shutting down, and supercharge our economy—all without raising taxes. It’s why 38 states—including many Republican states—have chosen to expand.

ENDING THE ASSAULT ON WOMEN’S RIGHTS

We need a governor who is going to respect a woman’s right to choose. I’ll be a governor who doesn’t stand in the way of women making their own healthcare decisions but shows them the respect and autonomy they deserve.

​As governor, at least half of my cabinet agencies will be run by women and people of color because state government should look like the people it represents.

We don’t need Welcome to South Carolina signs when you cross the border from North Carolina or Georgia, you can just tell by the quality of the roads. It’s an embarrassment. What’s even more embarrassing is that Governor McMaster VETOED the bill to fix those same dilapidated roads.

​And when it comes to rebuilding our infrastructure, we need to think big. That means widening I-26 from North Charleston all the way to North Carolina. It means repairing the 745 structurally deficient bridges in South Carolina.

​Investing in our infrastructure will create jobs, help bring new businesses to our state, it’ll save us time in traffic, and less potholes means less money you have to spend replacing your tires.

We will make sure state government is as diverse and inclusive as the people it represents. That means a more diverse judiciary and cabinet, and I’m committed to having the most diverse cabinet and staff of any governor in our state’s history.

We should provide tax and economic incentives—like we offer to foreign companies—to minority-owned businesses right here in South Carolina.

​And we must get serious about policing reform in this state so young black men and women can feel safe on the streets of their own community.

As governor I will put an immediate stop to the dangerous and unAmerican efforts in South Carolina to make it harder for people of color to cast their vote. Instead, our state should lead on voting rights through:

GETTING RID OF CAREER POLITICIANS

We have to get serious about tackling corruption at the state house and that starts with eliminating career politicians. We need to implement term limits on all legislators, ban them from raising money during the legislative session so they can focus more on doing their job than keeping their job, shorten session and save taxpayers millions of dollars, and end gerrymandering once and for all so legislators can’t draw their own districts to protect themselves from accountability.

As governor, I will fight for an independent redistricting commission to draw district lines and I will work to ensure that those lines are fair and representative of our state.

As a gun owner, I support the 2nd Amendment and the right to bear arms, and I also support everyone’s right to a safe community. That’s why it’s time to close the Charleston gun loophole and pass universal background checks in South Carolina.

​As a parent, I shouldn’t have to worry about whether my son will make it home from school alive. South Carolinians should be able to go to the movies, to the grocery store, or to the post office without worrying whether they will make it out alive. Reasonable gun safety reforms can create a safer South Carolina for all of us.

Governor McMaster may not be willing to say this, but I am: I believe in science and I believe in climate change. South Carolina has the opportunity to use our natural resources to be a global leader in the fight against climate change and invest in clean energy jobs of the future—and I will make sure we don’t waste it.

Climate change is causing sea level rise which then causes flooding on our coast—particularly In the Lowcountry. Charleston continues to shatter records for tidal flood days; even on sunny days, downtown Charleston streets can flood.

We must also pledge to protect our coastline and our tourism economy and oppose offshore drilling and seismic airgun blasting.

We have to change our approach to economic development in this state. Instead of spending hundreds of millions of dollars during foreign businesses to South Carolina who only produce a fraction of the jobs they promise, we should spend that money investing in new and existing small businesses, who are already here, to help them grow and expand. And we will be unafraid to explore new industries that can bring in jobs and new revenue to our state.

Investing in the businesses that are already in our state will save taxpayer money and end up creating even more jobs. We’ll make sure those jobs are available to all our citizens – and that those jobs can pay the bills.

​It’s shameful that South Carolina doesn’t have a minimum wage. No one in this country can live off of $7.25 an hour. I support raising the minimum wage to $12 an hour because no one who works full-time should live in poverty.