The event is free and open to all.

Everyone seems to agree that U.S. immigration law is broken. So what should done to
fix it? Myrtle Beach-based immigration attorney Donusia Lipinski, J.D.,

will address this subject in her talk .
Lipinski’s goal is to create dialogue about this crucial, often vexed subject. “We now
have two sides that can’t or won’t talk to each other,” she notes of the national debate over
immigration. “We all think we are right. We all care about where we live. And for the most part,
we care about each other. I do believe that if we can get both sides heard, we will see there
are more commonalities than differences. I would love to have that dialogue. I am an optimist.”
As a passionate immigration attorney with over three decades of experience, Lipinski
brings an in-the-field vantage to what’s working and what’s not with current U.S. immigration
policies and procedures. How do we strike a balance between treating immigrants humanely
and compassionately, while also respecting reasonable limits of law and national boundaries?
Though immigration has long been a controversial matter across American political history, it
has emerged again at our current historical juncture as a particularly fraught issue. Lipinski’s
talk will help us examine why immigration is such a tense conflict right now, and help us
explore productive ways forward. On a larger level, her discussion will invite us to reconsider
the question: As Americans, who have we been, and who do we want to be?
Herself a second-generation immigrant of Polish descent, Lipinski, who speaks English
and Spanish, is an active member of the American Immigration Lawyers Association (AILA), a

national organization of 13,000 immigration lawyers and law professors who practice and
teach immigration law. She was elected to two terms on AILA’s Board of Governors for six
years and as a Trustee for the American Immigration Council for one year. In addition, she
worked at AILA’s national office in Washington, DC, as the Associate Director of Advocacy,
with expertise in family and due process issues in the context of immigration. Lipinski has been
honored with several local and national awards for her work, including the 2006 Lifetime
Achievement Award from the Colorado Chapter of the American Immigration Lawyers
Association (AILA), the 2004 Annual AILA Advocacy Award, and the 2001 AILA President’s
Award, and in 2013, Lipinski was chosen on the cover of the 2013 Piedmont Business
Journal’s Fourth Annual issue of “20 Women to Watch” because of her compassion. 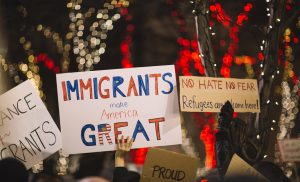