“We want to engage, educate, and empower the members of our communities, said Alester Linton-Pryor, HCDP chair. “I believe that if our voters can see, hear, and meet our candidates, they will be more informed, energized, and ready to vote Blue,” she said.

“We want every Democrat in Horry County to know how important they are and that their voices will be heard.“

The Engage Horry initiative is intended to inform residents about HCDP activities and for party leaders to learn about local concerns. “One of the most significant things Engage Horry will do is provide first-hand accounts of community issues and concerns and how we can work to see improvements and change,” Linton-Pryor said. 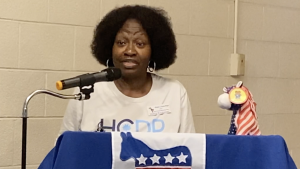 McLeod and Cunningham each told attendees why they are running for governor of South Carolina and discussed the focus of their campaigns. But before they spoke, South Carolina Democratic Party chair Trav Robertson said their candidacies indicate that Democrats are poised to turn Horry County blue and elect a new Democratic governor in November 2022.

“It represents us taking the fight to the Republicans,” he declared.

McLeod said she launched her campaign from Bennettsville in Marlboro County “because it epitomizes the neglect that Gov. McMaster has imposed on rural counties across South Carolina.”

She said one of the primary motivations of her candidacy was that so many “of our best and brightest” students are leaving the state for their education, and not planning to return. She called for investments in education, infrastructure, and healthcare and, like Cunningham, said she would expand Medicaid in the Palmetto State, which the Republican administration in Columbia has refused to do – even at the height of the pandemic.

Cunningham said he decided to run for governor and not seek a return to Congress because “that’s where the need is,” saying that McMaster has sided with defeated President Donald Trump’s “big lie” that the election was stolen, that the governor supports open carry, overturning Roe v. Wade, and has led a state where education is abysmal.

Promising to be an “education governor,” Cunningham called for “a significant” increase in teachers’ pay, free college for those who maintain a “B” average in high school, sensible gun control laws, and police reform. 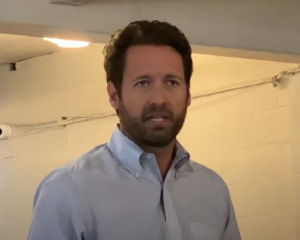 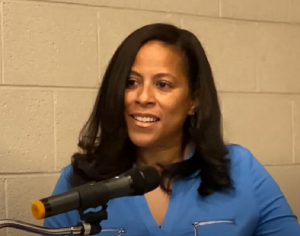 For the complete remarks by McLeod and Cunningham, view this video: https://youtu.be/wa_FpdVIvB4

For a photo album, to which photographer Bill Friedman contributed, please click here: