Your campaign appears to be going rather well. It looks like the polling is in your favor and unless you make a major mistake, you may be on your way to victory. At this point, you might even be able to say all the things you wanted to say to Donald Trump at the first debate and it wouldn’t hurt you one bit. You know, something a lot stronger than “will you shut up, man?”

But I wouldn’t count those chickens just yet. We all know Trump has no bottom of the barrel when it comes to winning. He will pull every dirty trick he can think of, including purposely spreading the cor

onavirus around hoping it will land on you.

Let’s not talk any more about Donald Trump though. Let’s talk about all the things you need to make sure get done once you win the election. There are all the talking points about getting COVID-19 under control, mitigating global warming, bringing back millions of jobs and police reform.

Preserving the Affordable Care Act (ACA) and building on it is also a major point in your Build Back Better campaign. You want to preserve the ACA without eliminating private health insurance companies. Would you even consider a universal healthcare system like the ones in Canada and the U.K.? These systems give peace of mind, especially to retirees. Those who want to retire before 65 could do so without having to calculate in monthly healthcare premiums, which may be prohibitive to their early retirement plan or end up increasing every year until they can no longer afford to be retired. Medicare for All is not the answer either as Medicare has its own problems.

Joe, if you are not willing to consider universal healthcare for everyone, how about some financial help for seniors? Why can’t we have a system where those on a limited income can have full coverage under Medicare without having to buy a Medigap plan or switch to Medicare Advantage? Insurance company advertisements make it sound like you can’t survive without forking over more of your retirement money to pay for the gaps Medicare doesn’t cover. Medigap plans fill the void, but at additional premiums that may be double what retirees already pay for Medicare Part B. Anyone close to retirement may be scared by these ads and wondering if they have calculated enough just for the monthly premiums.

People should be able to retire when they want, not when they think they can afford to pay for health insurance premiums.

Medicare Advantage plans are advertised as a replacement for traditional Medicare. These Advantage plans may cover drugs, dental, vision, hearing and potentially other benefits at “no additional cost”. Read the fine print on that statement before you sign up. Some plans may have additional out of pocket costs, require in network providers and don’t necessarily travel for those who want to live seasonally in different states and if it does, the co-pay for treatments can be 50 percent or more.

We need to have Medicare without the insurance middleman. Medicare should cover everything an insurance company would, even if the monthly premium has to go up a bit more or the payroll deductions for Medicare go up slightly for everyone. Or a combination of both.

Wouldn’t you want to pay a little bit more to get all of the benefits you need without having to look to private, for profit insurers? 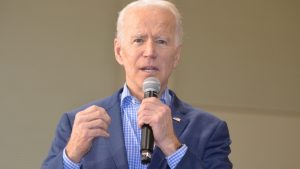 This is something for you to consider when you get to the White House, Joe. Maybe some of that money from repealing the corporate tax cuts could go toward making Medicare a real healthcare retirement plan that covers everything. Leave the private insurance companies to employer plans or those in the ACA marketplace. They will still make their billions every year.

A Few More Things for Your Consideration

Joe, we all have seen what a train wreck the last four years have been under a president who, even today, has no political knowledge. He has learned nothing since he took office. What are you going to do to keep another Trump from winning again? Here are some additional points not really being talked about.

And finally, please look at all the times Donald Trump found loopholes in our Constitution and plug them up, re-evaluate presidential pardons and executive orders. Basically, curtail presidential powers to keep someone else from abusing the office for their personal agenda.

We are all counting on you to get our country back on track and bring us into the future.

Thank you, Joe Biden, for your time and your service to America. We are all looking forward to the wonderful things you will do as President of the United States.