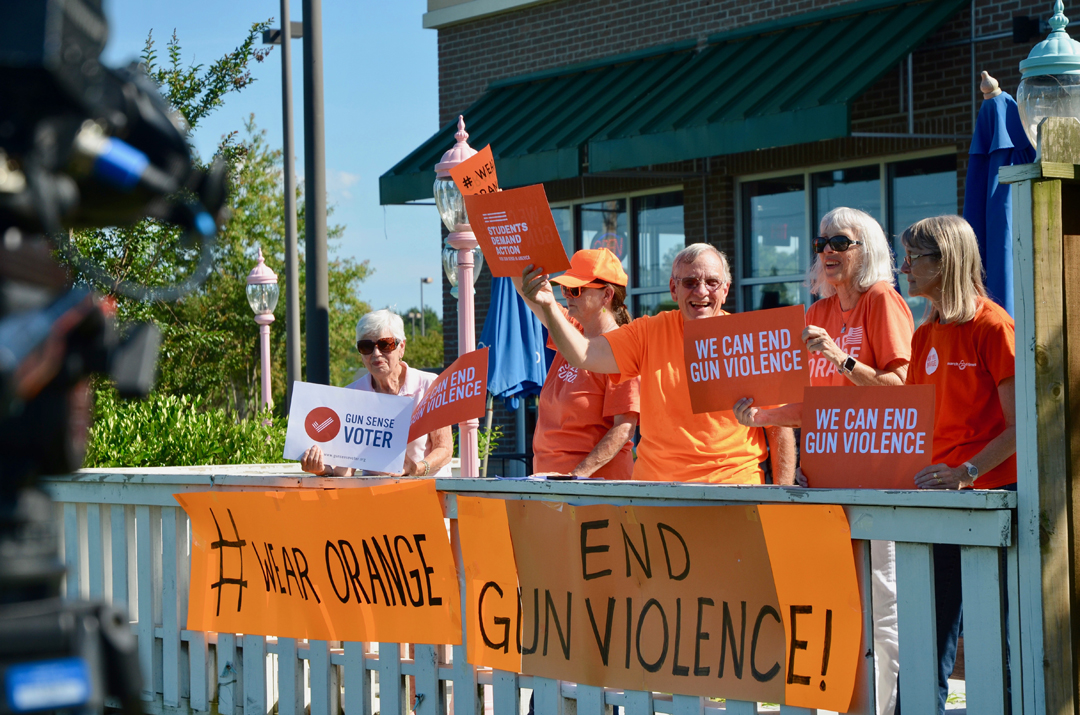 As part of a national Gun Violence Awareness event, with similar demonstrations across the nation, Horry County Democrats stood with Cleopatra Cowley-Pendleton and Nathaniel Pendleton, who’s 15 year old daughter was shot in Chicago in 2013. Her memory and recognition of countless others killed by gun violence were honored by those who wore orange.

Hadiya’s friends chose orange because it stands for safety and means “don’t shoot.”

“We also gathered in memory of gun suicides, school and other mass shootings and all deadly acts facilitated by weak legislation on guns,” said HCDP Chair Don Kohn, who was one of the demonstrators at the Conway event. “We’re speaking out because common sense gun regulations have been thwarted by the rich gun lobby despite the hard work of many South Carolina and Congressional legislators.”

Kohn said HCDP advocates banning the sale of bump stocks, silencers, assault-type weapons that have no sport or safety purpose, as well as removing guns from the hands of all domestic abusers. HCDP also calls for stronger background checks to prevent gun sales to criminals who put our safety at risk.

“We want the Charleston Loophole closed,” he said. “Change the rule that allows gun sales to go through after a short period, even though a thorough background check has not been completed.”

Kohn said HCDP also advocates closing the “Gun Show Loophole,” which allows buyers to bypass a background check for gun show purchases and urged the South Carolina state legislature and all levels of law enforcement to “effectively address the torrent of illegal guns that plague our streets.”

In addition, he called for education and training to prevent bullying and violence be provided at all educational levels and workplaces.”

To view photos from the HCDP demonstrations, please visit https://flic.kr/s/aHsmcQq8bQ.