Looking to update your license? Register your vehicle? Turn in your plates? How about registering to vote at the same time? Sixteen states and the District of Columbia are seeking to increase voter participation by instituting Automatic Voter Registration at the local Departments of Motor Vehicles.

This unique approach to increasing voter registration is to address an increasingly mobile population. By allowing voters to register at the DMV, states hope to remove the excuse, “I’m not registered” as a reason for not voting.

While the registration is automatic once a person applies for their driver’s license in these states, there is an opt-out option, however voters will need to manually select this option or they will be automatically registered. 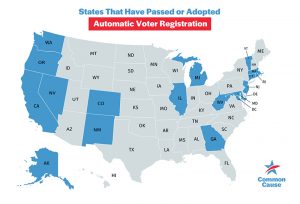 With sixteen states and growing, (New York is on track to become the seventeenth), the move to make voter registration easier is becoming a national trend, yet it has yet to take hold in South Carolina. That may be about to change as well.

In a movement spearheaded by former First Lady Michelle Obama called “When We All Vote”, the effort is to remove the barriers to voting and thereby increase voter participation. This plan would allow South Carolinians to also be participants in Automatic Voter Registration.

While South Carolina allows on-line voter registration and it can be done at Department of Motor Vehicles (DMV) locations, it is not done automatically and is still up to the individual to make the effort to register. By having Automatic Voter Registration, the aim is to remove the barriers to those with limited computer access.

Not surprisingly, the only opposition to AVR comes from ultra-right wing organizations. They warn of issues of voter privacy, but if it’s associated with your driver’s license, how can this be an issue? Their opposition is an obvious ploy at voter suppression. To put it another way, if they oppose it, we must be doing something right.

It’s time for South Carolina to join the growing numbers of states that allow AVR. In doing so, it would allow more people to Take a Stand.