If House Speaker Paul Ryan (R-WI) has his way, not only would Medicare and Medicaid be emasculated, but the Supplemental Nutrition Assistance Program (SNAP), i.e., food stamps, would mostly be sent to the trash heap.

That news brought strong protests on Twitter from people who say their very lives depend upon the assistance they receive from SNAP. 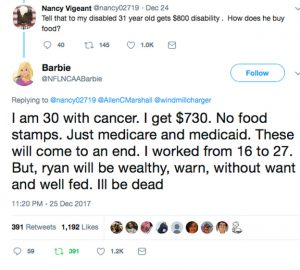 Fortunately, it looks like Ryan is running into some opposition from other Republicans, including Senate Majority Leader Mitch McConnell (R-KY), who doesn’t think it’s a great idea, with November elections ahead, to further alienate low and middle-income Americans — many of them Trump voters — who are already ticked off by the unfairness of the new tax reform law.

“The sensitivity of entitlements is such that you almost have to have a bipartisan agreement in order to achieve a result,” McConnell told reporters at a news conference last week.

Opposition from the Democrats to welfare and entitlement changes is all but certain, as they already smell blood in the 2018 Congressional elections, so there is virtually no chance of a bipartisan deal that would gut SNAP or any other “entitlement” programs.

To succeed alone, the Republicans would have to use reconciliation procedures to avoid a Senate filibuster, a move that would require nearly complete unity among Republicans, which is far from certain.

It will be important to see who prevails on these issues at the Republican retreat at The Greenbrier resort in White Sulphur Springs,WV, in late January — the right wing, conservative idealists like Ryan or the pragmatic politicians like McConnell.

It’s possible that, for those political reasons alone, SNAP and the other major “safety net” programs will survive Paul Ryan’s onslaught, thus stressing even more the importance of the 2018 Congressional elections.