The Tax Reform Bill — Don’t Be Fooled this Holiday Season

After stumbling through its last day for a second House vote in two days, the Republican tax bill is heading for Donald Trump’s signature. It’s a bait-and-switch that will leave the people who actually work for a living paying for a huge holiday gift to corporations.

The Republican tax reform bill is not the big, beautiful Christmas present Trump promised the middle class. It will not cause Trump to pay millions like he has claimed. It does not fulfill some populist campaign promises. It is a sham.

The primary highlights of the bill for individuals are:

There are still seven individual tax brackets.
The standard deduction is almost doubled.
The personal exemption is eliminated.
The child tax credit is doubled.
The deduction for state and local taxes is limited to $10,000.
The mortgage interest deduction is decreased from $1 million  to $750,000.
It maintains the estate tax, but the amount exempted from taxation doubles.
The Affordable Care Act requirement that most Americans have health insurance or pay a penalty is removed.

The impact on individual taxpayers depends on how the pieces fit together. For instance, the standard deduction is nearly doubled, which is a plus, but the personal exemption is eliminated, which is a negative. The child tax credit is good, but it may not offset the loss of the personal exemption. Families with two kids could have a tax savings, while families with more than two kids could have a tax increase.

Eliminating the unpopular Affordable Care Act penalty for not having insurance will help lower the tax bill for those without insurance. It will also save the government subsidies for those who leave the exchanges. Besides the tax impacts though, the ranks of the uninsured will swell by 13 million more people and those who remain on the exchanges will see their premiums increase.

Republicans included two things that let them get through the Senate with only Republican votes — the Affordable Care Act savings and the fact that individuals will see their tax cuts end in 2025. They are only temporary, while the changes for corporations do not end. They are permanent.

That’s the bait-and-switch and the chart below, using analysis by the Senate’s former top tax aide and New York University professor Lily Batchelder, demonstrates how over the next ten years, individual taxpayers pay for the corporate tax cuts. 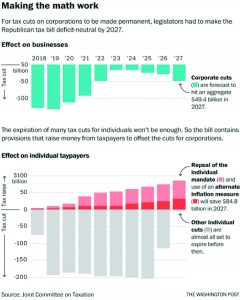 The end of the Affordable Care Act penalty and the expiration of individual tax cuts is not the complete picture. Republicans also change how inflation is calculated for indexing the tax brackets. The change diminishes inflation’s impact over time, so that the tax brackets do not keep up with inflation. To keep the tax bill within the Senate’s rules, by the end of 10 years, individuals will pay nearly $85 billion more to fund the $49 billion dollar corporate tax cut.

Republican PR says don’t worry, the corporate tax breaks will make U.S. companies more competitive in the worldwide economy, production will expand, hiring will increase, wages will grow and on and on. Production has been expanding since the Obama administration, unemployment is below 5%, wages are starting to see some increase, and as the economy starts to heat up, the Federal Reserve is slowly increasing interest rates.

Economic stimulus is needed to get out of a recession or depression. A good example is the stimulus package passed under Obama to get us out of the Great Recession. It’s not needed now. As La Colombe CEO Todd Carmichael said, the GOP tax plan is like giving CRP to LeBron James.

Lowers the corporate tax rate to 21 percent from the current 35 percent.
Establishes a 20 percent business income deduction for the first $315,000 in income earned by pass-through businesses.
Eliminates the corporate alternative minimum tax.
Current off-shore profits can be returned to the US at an 8% tax (15.5% for cash).
Future off-shore will be taxed in the foreign country, not the U.S.

Corporations are sitting on trillions of dollars of cash. The effective tax rate, what they actually pay, of many large companies is estimated to be below 20%. Corporate profits are booming and the stock market is setting records. And corporations are paying larger executive bonuses, paying bigger dividends and investing in automation and robots.

Republicans explain that the corporate tax cuts are permanent because companies need certainty for planning. The middle class would like the security to plan, too. But someone has to pay the bill, and it’s American workers.

And, on top of all of this, the GOP tax grab will increase the federal deficit by more than $1.5 trillion over 10 years. That’s TRILLION. With a “T.” The Republicans claim it will pretty much be wiped out, though, by the new jobs, new investments, etc. that will result. Nirvana will have arrived. But if the individual tax cuts are extended beyond their expiration in eight years, estimates are that the deficit will balloon to nearly $2.5 TRILLION.

How is this good for the American people, the average person, the middle class? Our kids and grandkids will be paying for this GOP tax scam for years to come.