The first presidential debate of 2016 is in the books, and Hillary Clinton was widely declared the hands-down winner. Fortune Magazine summed it up: “Hillary Clinton won. In the first and potentially most consequential presidential debate of 2016, the Democratic nominee presented as composed and commanding, ticking through her policy prescriptions while landing a series of devastating blows on Donald Trump’s record and readiness.”

Women across Horry County have been excitedly engaged in this historic campaign to elect the first woman President of the United States. Leading the local grassroots efforts is the Democratic Women’s Council of Horry County (DWCHC).

Pam Heller, DWCHC president, reports that membership has jumped in recent months, as women sign on to help elect Hillary. “We are definitely seeing an increase in new members and active participation at our events,” said Heller. “I believe we are witnessing the natural camaraderie among women – of all ages and political stripes – who are determined to elect the first woman to the highest office in America and who want to be involved in making it happen.”

The DWCHC is organizing weekly phonebanks on Thursday evenings in Myrtle Beach. Leading this effort is Carole Dwyer. For more information, email Carole or call (843)293-2696.

On Tuesday, October 11, one month before the November 8 election, DWCHC is holding a special “Countdown to Victory” event to provide an opportunity for Hillary supporters to get together, as well as to introduce potential new members to the DWCHC “family.” For more information, email Pam Heller. 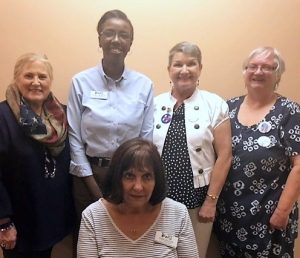 The DWCHC has four goals: identify and prepare women to run for office; conduct an annual scholarship contest for local college-bound students; provide a forum for women’s issues; and support Democratic Party principles and platforms.