Editor’s Note:  As previously announced, we’re starting a weekly blog, and this is the first edition. 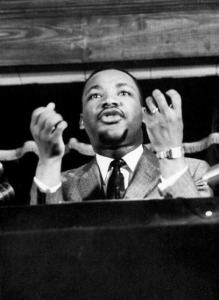 From January 12-15, we will commemorate a singular moment in the history of our great country – the 55-year anniversary of the famous March on Washington when Dr. Martin Luther King, Jr. presented his famous “I Have a Dream” speech on August 28, 1963.

It was an event that changed the landscape of our national civil rights movement forever, but more than that, it marked a turning point for all Americans who believe, deep down, that all men are created equal, endowed by their creator…

Sadly, however, our nation was shocked when less than five years later, on April 4, 1968, Dr. King was assassinated by gunman James Earl Ray outside the Lorraine Motel in Memphis, TN. Gone was this heroic figure who had the courage to speak out on behalf of all people of color, to protest nonviolently against hateful discrimination that continued to persist across the American landscape.

So, during those few days in January, we will host the Grand Strand’s 12th annual “Building Stronger Communities” event to commemorate both of these turning points in our nation’s history. Included will be activities focused on introducing and reinforcing the personal and public values preached by Dr. King and his vision of a united, colorblind society.

I urge you to attend, participate and actively support this event, which will include over 13 exciting major activities in five prominent locations throughout the region. As the event chairman, I am pleased that so many community and political leaders have come together to honor Dr. King, including U.S. Rep. Tom Rice (R-SC) and state Rep. John King (D-York), chairman of the South Carolina Legislative Black Caucus, both of whom will be guest speakers.

There are numerous ways that you can visibly demonstrate your commitment to uniting and improving our community through our several support packages. It’s a great way to show your commitment to moving forward the battle for equality that Dr. King gave his life to achieve. You, too, can help contribute to this human bouquet of flowers that will be woven as we honor the memory and the accomplishments of Dr. King.

Our nation still is beset by many of the ills of inequality, discrimination and poverty that Dr. King sought to address. I am committed to continuing this effort here in Horry County, with the hope of helping people come together on issues of discrimination, whether it is racial, sexual, or any other form.

We must continue our efforts to improve education here in South Carolina for all people, to make certain opportunities are available to all, regardless of race, color or creed. We must improve the lives of our families, assure safe neighborhoods and break the cycle of gun violence.

Perhaps above all, we must make certain all of our children can be safe and not fear for their lives when they are walking to the school bus, attending class or in playing in the playground.

Why should black parents have to worry about whether their children will be treated fairly by the police? That is unconscionable, but all too often it is the reality in which we live.

There is a disconnect in our society between what we say and what we do, and that needs to be addressed. Our MLK celebration will help bring us together and perhaps make further strides towards creating a human bouquet of flowers for us all.