Acknowledging that Democrats in Horry County for years have been the “underdogs,” new Party Chairman Don Kohn April 3 declared that era has ended, and that a new, aggressive initiative is underway to turn that around.

“We know Republicans have a very strong foothold in Horry County, but that is changing,” said Kohn at a news conference at HCDP headquarters here. “Developments at the national and state levels have energized Democrats who strongly disagree with the policies of the Trump administration as well as priorities and actions of the Republicans who control the statehouse and state legislature.”

“We Democrats have been the underdogs here in Horry County, but that’s changing,” said Kohn. “The Republican free ride is over. We are riding a big blue wave.”

Kohn, who was elected to a two-year term as chair at HCDP’s Convention March 24, cited large increases in volunteers, dramatic gains in social media participation, and growing enthusiasm generally among Democrats as indicators that change is coming. Over the past year, more than 100 new volunteers have signed up, bringing diverse skills, commitment and enthusiasm to the Party.

A retired financial company executive, Kohn succeeds Bennie Swans, who served as chair for the past two years.

“Bennie did a terrific job of bringing attention to our party and helping to put us on the map,” said Kohn. “Bennie is a big believer in the importance of a two-party system, as I am, and worked tirelessly towards that objective.”

Kohn said he decided to seek the position of party chair because of his concern about the direction of our country, state and county under Republican control. “I want to use my management skills to help put our party in a position to turn that around,” he said.

In addition, Kohn said, thousands of new voters are moving into Horry County, particularly the Myrtle Beach area, many of whom are Democrats and are turning up as volunteers to help HCDP in numerous ways and are helping to breathe new life into the Party.

“One of our most important objectives,” said Kohn, “is to improve voter turnout in the November 6 election. To achieve this, we are engaged in a significant voter education initiative that utilizes the skills and dedication of an ever-growing cadre of volunteers who have signed up with us since the Trump election.”

But HCDP will not rest, he said, until qualified Democratic candidates are running for every available position on state and county ballots. “We are still recruiting candidates and invite any Democrat interested in serving, particularly in the state legislature, to let us know. We can provide lots of help.”

In the 2018 campaign, Kohn said HCDP will carry to the voters its message of inclusion, of fighting for seniors, for veterans, for improved education and health care. “The Republican tax cut was really for the rich and the ultra-rich,” he said.

Kohn also said he is proud of the diversity within the Democratic Party in Horry County, which is reflected in the party’s leadership through race, gender and age. “We believe this is essential to assuring that our party effectively represents all segments of the electorate,” said Kohn.

An important fundraising initiative, Kohn said, will be the first-ever Senator Dick Elliott Memorial Golf Tournament, to be held June 30 at Wild Wing Golf Club, Conway. “This will be a great event and a keystone for our fundraising efforts,” he declared. 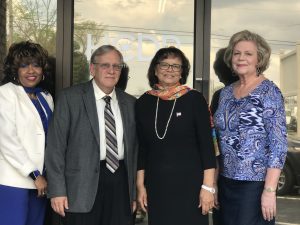 Hake stressed the importance of educating and turning out voters, but emphasized the need to protect voter rights, including making certain that released felons who have paid their debt to society understand that they have a right to vote. “If you’ve done your time and paid your dues, you can vote,” she said.

Hake also said South Carolina needs to invest in new voting equipment as the state’s antiquated voting machines often break down on election day and people are unable to vote. A paper backup system is needed, she said, also cautioning that all absentee ballots must be witnessed to be counted.

Potter-Hickman said her priority is to “protect the vote,” to recruit and train poll watchers and to “end the intimidation factor that still exists.” She said South Carolinians “have a right to vote and we want every vote to be counted.”

DeWitt said she was excited that the North Strand Democrats, which she co-chairs, will be sponsoring a Candidate’s Forum April 25 in which Democratic candidates for the 7th Congressional District seat will participate.

“This is a terrific opportunity for voters to come out and meet our candidates, listen to their views on the issues, and become informed in preparation for voting in the June 12 primary election,” said Kohn