Democrats in Horry County under the age of 35 now have an organization and a leader specifically focused on their concerns. Jennifer Cangeme became the chair of the Young Democrats of Horry County in late 2016 after spending a year in the SCDP Clyburn Political Fellowship program, which trains young people to take leadership roles and run for office. 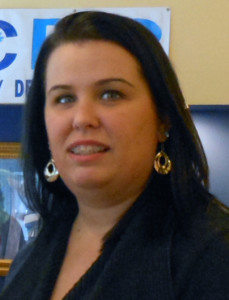 A graduate of the first class from the Clyburn program, Cangeme feels the time is right for young Democrats to come together. “Young people have become energized and angry since the 2016 election and are now looking for ways to contribute, not just to the party but to broad social change,” says Cangeme. “We know that it’s our future.”

The first meeting of the group in February drew twelve attendees, and Cangeme expects to see even more at upcoming monthly meetings. While she has her own interests — addressing the heroin epidemic, shedding light on mental health issues in Horry County, and others — she plans to encourage group members to propose other issues to work on so that everyone involved feels a sense of ownership.

The main goal for the Young Democrats is to encourage young people to “move out from behind their computers and get involved.” Facebook activism, she says, only goes so far, and young people need to contribute to the changes they wish to see in the world by working for organizations they support or even by running for office.

Cangeme plans to follow her own advice by running for Horry County Council in 2020. She recognizes that Democrats in Horry County face a difficult challenge, but sees the first step toward turning the county blue is to get voters excited about candidates. And having more young candidates on the ballot can do just that, she says.

In the meantime, Cangeme is planning to hold public workshops to educate voters of all ages about a wide range of issues. She hopes to hold them in locations such as schools, churches, and libraries. One important goal of these public meetings, according to Cangeme, is to empower people who otherwise might not get involved in the political process — including minorities, people without transportation, and young people. The common thread linking all of these populations, says Cangeme, is that they often feel powerless to contribute.

Cangeme is passionate about getting these kinds of “outsider” voices involved in the political discussion. When she applied to the Clyburn Political Fellowship, she wrote an essay about her goals, which include getting more women involved in politics. After a year in the rigorous program, Cangeme is now ready to put her training to work for the young people of Horry County.

If you are interested in working with or learning more about the Young Democrats of Horry County, Jennifer Cangeme is eager to hear from you. Contact her by e-mail at either youngdemsofhorrycounty@gmail.com or jennifercangeme@yahoo.com. Or visit the group’s public Facebook page Young Dems of SC – Horry County.